The South Humber Ports are the largest major port complex in the UK, which are not served by a W12 gauge cleared rail line. It is anticipated that by 2020 over 50% of containers arriving at UK ports will be on ‘high cube’ containers. These are 9’6” in height and limitations along the route from Immingham to Doncaster included height and width restrictions to bridges, platforms and other structures. 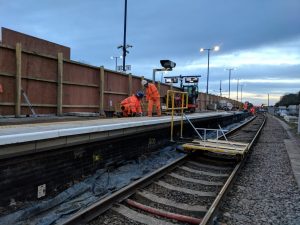 Enhancements to provide W10 and W12 Gauge Clearance along this route were required to maintain the economic competitiveness of the Humber Ports and facilitate further expansion, by allowing ‘high cube’ containers to be carried. Twenty nine interventions were identified as being required to achieve Gauge Clearance, which included bridge reconstructions at Eastfield Road, East Halton Road and Armthorpe Lane, coper realignment at platform edges including Brocklesby, Barnetby, Scunthorpe and Crowle, Thorne South and Hatfield and Stainforth, signal relocation and minor track realignments.

Work started on site in 2018 and it is anticipated that the W12 Gauge Clearance Certificate will be issued in June 2019 following the demolition of East Halton Road Bridge, which is the last scheduled intervention. 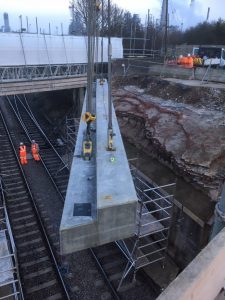 The Ports of Immingham and Grimsby are the busiest ports in the UK by tonnage, handling 54m tonnes in 2017[1]. It is estimated that 25% of UK rail freight originates in North and North East Lincolnshire, although this could potentially decline in future years, due to a forecast reduction in bulk products such as coal.  W12 gauge clearance will therefore provide the opportunity for growth in Intermodal Containers and this will counter-act any future loss of bulk traffic.

The Humber LEP Strategic Economic Plan identified that a key constrain to the Humber Ports was the restricted gauge clearance for the movement of high cube containers. The SEP identified this as a key scheme, which will play a vital part in the area’s growth plans. 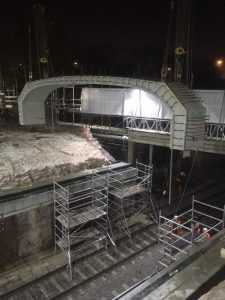 Associated British Ports, (ABP), announced in September 2018 a major expansion plan for its operations at the Port of Immingham.  Following continued growth in container volumes in 2017, ABP will spend £36 million on the container terminal. In addition to the container investment, ABP’s shipping customers are projecting significant growth in volumes they handle in the coming years. To meet the challenges of these projections, ABP has committed to investing a further £2.8 million in expanding the land and services available to support customer operations within the port. 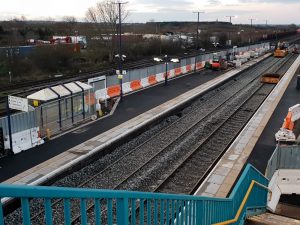 In 2013, the Port of Immingham handled 68,000 container units, but by 2017 that number had grown to 183,000 units. A shift in trade volumes been noticed, with cargoes originally destined for ports such as Felixstowe and Dover, moving increasingly north as trade partners look at alternatives to mitigate any difficulties the more traditional routes may experience in future. ABP expects the latest investment in Immingham could support further growth in volumes of around 50% by 2020.

The total cost of the scheme is approximately £17 million, which has been funded as follows: £7.2 million from the Government’s Local Growth Fund, secured by the Humber LEP and part of the Government’s commitment to the Northern Powerhouse, Network Rail (Strategic Freight Network) and £0.8 million from North Lincolnshire Council. The scheme would not have been delivered without LGF support.