The Humber LEP has welcomed further investment in Grimsby as Communities Secretary Robert Jenrick announced today (2 March 2020) over £3.5 million of government funding for Grimsby, including £2.2 million of new investment for the next phase of its landmark Town Deal. 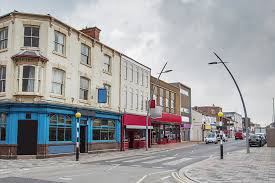 The additional investment brings the total commitment of public and private funding to over £90 million to deliver ambitious targets of over 8,000 new jobs and nearly 10,000 new homes in Grimsby through the UK’s first Town Deal.

On top of this, Grimsby will also still have the opportunity to bid for up to £25 million as part of the £3.6 billion Towns Fund.

On his tour of Grimsby, Mr Jenrick learned how the money will fund work to boost footfall in Grimsby town centre, by providing a high-quality replacement pedestrian footbridge over the River Freshney and improve the attractiveness of the strategic Garth Lane site to potential investors.

Lord Haskins, Chair of the Humber LEP, said: “We very much welcome the announcement of the third phase of the Grimsby Town Deal.

“The continuation of the commitment by government to work with businesses and the local authority to further the regeneration of Grimsby is extremely positive news.

“The Humber LEP are pleased to support the development of Frederick Ward Way as part of the Town Deal, with £1.3 million allocated from the Local Growth Fund to support highway improvements on Garth Lane, which will in turn help unlock potential in Grimsby town centre.”

Cllr Philip Jackson, Leader of North East Lincolnshire Council said: “We’re delighted to have made further progress on our ambitions to deliver the Town Deal and grateful to government for working with us to help deliver these schemes and get spades on the ground. This announcement further cements the government’s belief in what we’re doing in Grimsby.

“The Town Deal is acting as a catalyst to unlock a much wider regeneration programme for Grimsby town centre and the Port of Grimsby. It has the potential to realise new commercial, cultural, leisure and residential opportunities on the port and on under-used land around Alexandra Dock.

“Delivering the Town Deal will bring about major changes for north east Lincolnshire and help to deliver a brighter future for our residents and businesses.”

“Grimsby is leading the way and we want to replicate this deal in over 100 towns that will benefit from this government’s £3.6 billion Towns Fund – which will also fund further projects in Grimsby.

“We want to level-up all parts of the country, ensuring that opportunity and prosperity is available to all and we unleash the potential of the Midlands and the North.

Simon Clarke MP, Minister of State, Ministry of Housing, Communities and Local Government said: “Town Deals are a key part of this government’s strategy to grow our regional economies.

“Towns like Grimsby have a proud history as the birthplaces of industry, and it is right that they lead the way in levelling up prosperity across our nation.”

The ground-breaking Greater Grimsby Town Deal was launched on 5 July 2018 beginning a stronger relationship between central government and local partners.

The government’s Future High Streets Fund will also support and fund local areas’ plans to make their high streets and town centres fit for the future.

Grimsby is one of over 100 places benefiting from the £3.6 billion Towns Fund. The towns eligible for the support include places with proud industrial and economic heritage but have not always benefited from economic growth in the same way as more prosperous areas.