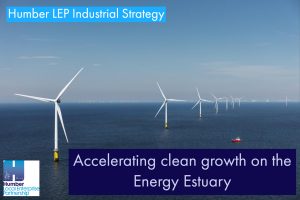 The LEP is seeking to agree an industrial strategy with Ministers, setting out joint commitments between Government and local leaders to develop the Humber economy.  The LEP has been tasked with developing the plan on behalf of the region.

Today the LEP published a prospectus for the industrial strategy, signalling that it is ready to start formal engagement with Government on its proposals and inviting local people, businesses and other organisations to give their views on the priorities. 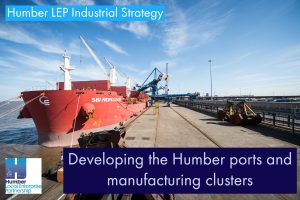 A new ambition to reduce the Humber’s net CO2 emissions to zero by 2040, protecting strategically-important industries and maximising benefits for local communities and businesses.

This would mean a co-ordinated approach to decarbonisation across our economy and society, including energy, industry, business, the public sector, homes and transport – making the Humber the first industrial region in the world to achieve this.

Critical to this will be strengthening the competitiveness of the Humber’s energy-intensive industries like steel, which contribute 20% of the value of the region’s economy and are vital national assets.  This could see the Humber being the first UK region to roll out carbon capture technology at scale to capture any remaining emissions which cannot be eliminated from industrial processes, building on the current trial at Drax.

With the Humber emitting more CO2 than any other UK cluster (30% more than the next largest), and the area especially vulnerable to climate change, decarbonisation is the most significant challenge, and the greatest opportunity, for the Humber economy over the next two decades.

Now a major player in offshore wind, the LEP wants to put the Humber at the forefront of the next phase of the sector’s development.  The Sector Deal agreed with Government will see installed capacity rise substantially to 30GW by 2030 and 50GW by 2050, or potentially 75GW if the Committee on Climate Change’s advice is followed.  Most of this will be in the North Sea, with the Humber again centrally located.  The LEP’s proposed ambition is for the Humber to support at least half of the new wind capacity through manufacturing, construction and/or operations and maintenance.

To maximise the benefits of this investment, the LEP wants to stimulate local supply chain development, establish the Humber as a national centre of excellence for offshore wind skills and develop the area’s innovation credentials.  It also identifies decommissioning and repowering offshore wind turbines as a medium-term opportunity for the Humber to target.

The LEP also highlights the potential to develop an electric vehicle supply chain in the Humber.  The Phillips 66 Humber Refinery is the UK’s only manufacturer of petroleum graphite coke, used in both electric vehicle batteries and consumer electronics and exported around the world.  As British and European car makers switch to producing electric vehicles, the Humber could play an important role in enabling the transition.

Other forms of energy storage are also singled out as having potential for the Humber, including hydrogen.  Clean electricity generated by offshore wind farms could be used to produce hydrogen through electrolysis, while carbon capture could also support production of hydrogen from methane.  Hydrogen buses and trains are already being piloted in some locations, but the Humber’s ability to produce the gas and use it in industrial processes could make it a frontrunner in the transition.  Last week Drax, Equinor and National Grid Ventures announced that they were exploring the development of a hydrogen network in the Humber.

The Humber ports have the potential to relieve congestion in southern England by handling a greater proportion of UK imports and exports – building on a current trend of cargoes switching north.  There is an opportunity for further development of the logistics sector on the Humber and working with other northern ports to capitalise on new technologies and secure rail freight infrastructure improvements.

The ports have also enabled the Humber to become a magnet for a group of sectors the LEP has identified as “engineering and assembly” – with traditional strengths in caravan manufacturing, the growing modular building and kitchen manufacturing sectors recently joined by offshore wind installation and the forthcoming development of train assembly by Siemens Mobility at Goole.

Over 25,000 people are employed in these sectors in the Humber, the third highest concentration in the North, and the LEP believes that it is an area where the Humber could attract further growth – leveraging the Humber ports, available large development sites, skills and proximity to transport networks.

Work is also taking place on the digital tech and food sectors, and cross-cutting issues like skills and infrastructure which support the wider economy.  The LEP has commissioned Arup to produce a medium-term Infrastructure Review, which will be completed over the summer.

The proposals have been developed following months of business engagement and detailed economic analysis, which the LEP is publishing alongside its prospectus.

Consultation on the prospectus will run until the end of July, with details available on the LEP’s website at www.humberlep.org/industrialstrategy 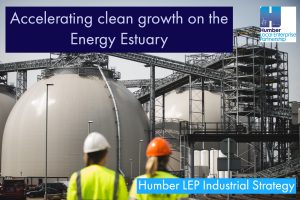 Lord Haskins, Chair of the Humber LEP, said: “The Humber’s transformation over recent years has been remarkable, but continuing that momentum will be hard.  Our proposals are designed to achieve that.  This is a bold plan which has been shaped by business, supported by our local authority partners, and I hope it will be well received.

“It is a distinctive approach, playing to the Humber’s strengths and looking at where we have the biggest opportunities for growth, but also a realistic one recognising that we cannot be the best at everything.  At the heart of it is competitiveness – of individual businesses, places and the Humber as a whole.

“The decarbonisation agenda could be transformational for the Humber.  We have clean energy, which we can generate a lot more of, an industrial cluster with sectors like steel, oil refining and chemicals that are vital to the UK’s strategic interests, and a geographical advantage.  We also have the highest emissions in the country, which will need to be tackled for the UK to meet its international obligations.  Bring all that together and we have a big opportunity to make what we have more competitive, attract new investment and create local business and community benefits.  It can only be done in collaboration, across sectors and boundaries, and we will need Government to get behind it too.

“I hope businesses and other organisations in the Humber will take a look at these proposals and I look forward to hearing their thoughts over the coming weeks.” 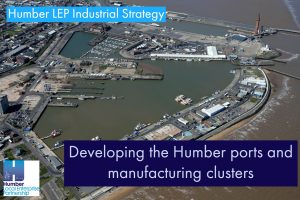 Business Secretary Greg Clark said: “I am delighted that the Humber LEP is launching its Local Industrial Strategy prospectus for consultation today, including ambitious plans to be a global leader in clean energy generation.

“This is a critical time for the Humber, and we’ll be working closely with local partners to develop the priorities set out in this prospectus into an ambitious Local Industrial Strategy – alongside the direct support we are providing around the future for British Steel.

“Our modern Industrial Strategy aims to boost productivity across the country by backing businesses to create good jobs and increase earning power. For Humber, this is a great opportunity for the region to come together and plan for a bright economic future for local people, businesses and communities”.

Simon Bird, ABP Humber Director, said: “The Humber Ports have for many years been at the forefront of driving growth in the regional economy as the gateway to trade. Our future industrial strategy is a fantastic opportunity to set out the Humber’s offer to the Government and other stakeholders about future growth, carving out our role in energy, ports and logistics and decarbonisation.”

Darren Cunningham, Lead Executive UK & General Manager Humber Refinery, Phillips 66, said: “Here in the Humber we manufacture the products we all need to sustain our modern society. We look forward to working with the Government and others as part of the solution as we move towards a lower carbon economy.”

Emma Toulson, Lead Stakeholder Relations Advisor at Ørsted, and heavily involved in highlighting the Humber’s leadership in offshore wind as part of the industry’s Sector Deal, said: “The Humber is in a global spotlight as we host many delegations coming to understand the transformational impact offshore wind is having in the region. From the Humber, we’re building the biggest offshore wind farms in the world, and have developed state-of-the-art facilities, technology and vessels to support this in Grimsby. Delegations from as far as America, Taiwan and Japan are interested to see a blueprint of how this clean-tech, growing industry can bring wider opportunities to the local area.

“The recently announced Sector Deal promises a healthy future for the industry, with enough capacity planned to generate a third of the UK’s electricity from offshore wind by 2030. We believe the Humber has a large role to play in this delivery and will benefit from opportunities both in direct jobs and in the supply chain.

“As a company with a vision to create a world that runs entirely on green energy we support the LEP’s ambitious plans to deliver a Low Carbon Humber Energy Estuary.  It’s an exciting time and we look forward to being a part of realising this vision.”