The Chairman of the National Infrastructure Commission (NIC) Sir John Armitt CBE called green energy a ‘game changer’ for the Humber economy, during a visit to Siemens’ wind turbine facility at Green Port Hull on Tuesday. 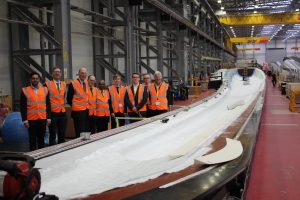 The Chairman of the National Infrastructure Commission (NIC) Sir John Armitt CBE called green energy a ‘game changer’ for the Humber economy, during a visit to Siemens’ wind turbine facility at Green Port Hull on Tuesday.

The trip, co-ordinated by the Humber LEP, included a high level meeting with local business and council leaders to discuss local infrastructure priorities, during which Sir John urged them to “continue to seize the opportunity for the region to be a key player” in pursuing clean growth and producing renewables.

The Humber region is home to several major low carbon and renewables projects, including the Siemens site which has already created over 1,000 jobs. The site provides blades for Orsted’s Hornsea One offshore windfarm, the world’s largest of its kind, which is located off the East Yorkshire coast and operated from Grimsby.

The visit follows the launch earlier this month of the Government’s Offshore Wind Sector Deal which outlined its ambition for offshore wind to provide a third of all UK electricity by 2030, as well as setting a target for home-grown offshore wind projects to make up 60 per cent.

In July, the Commission published its National Infrastructure Assessment – the first ever for the UK – which recommends that 50 per cent of the UK’s electricity should come from renewable sources, such as solar and wind, by 2030.

Chairman of the National Infrastructure Commission, Sir John Armitt, said: “Green energy is a gamechanger for the Humber – and it’s already proving its potential to boost the local economy and bring high-skilled jobs to the area.

“But as the Government’s recent offshore wind sector deal showed, we think this could go further and in our National Infrastructure Assessment the Commission has said that Ministers should aim for half of the UK’s electricity to come from clean sources by 2030.

“We encourage local leaders to continue to seize the opportunity for the region to be a key player in the production of renewables.”

Humber LEP Chair Lord Haskins added: “Clean growth and renewable energy are at the heart of the Humber’s offer and central to our forthcoming Local Industrial Strategy. We have made a name for ourselves as the UK’s Energy Estuary and one of the key destinations in Europe for investors in this sector. We’re now looking to build on this over coming decades to increase investment, jobs and skills whilst also lowering emissions.”

The Government will publish its formal response to the NIC Assessment later this year, in the form of a National Infrastructure Strategy.