Richard Stansfield is the Managing Director of Singleton Birch Ltd, the North Lincolnshire based quarrying and lime production company that celebrates its 200th anniversary in 2015. The Company is privately owned and over 50% of the shares are held in trust for the benefit of three charities; Barnardos, NSPCC and the RSPCA.

Richard joined the board of Singleton Birch in 2005 as Operations Director and has been the Managing Director since 2009. He has an MSc in Environmental Management, is a Chartered Director and is a Fellow of the Institute of Directors and the Institute of Quarrying and a Member of the Royal Society of Health. He is the Chair of the British Lime Association and a Vice president of the European Lime Association.

Singleton Birch supply calcium based chemicals and services across all sectors of the UK industry and exports across the globe. More recently, the company has diversified into renewable energy to help satisfy their own large energy requirements as well as those of local businesses and has set up Birch Energy to deliver these projects. 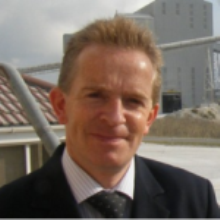